Home cooked food is something that is close to every foodie’s heart. We all love our favourite comfort foods cooked from scratch at home, which somehow taste delicious every time. But what would you do if the food cooked at home turned out to leave a bitter aftertaste? Would you share your feedback with your home cook, or would you simply swallow it up and pretend everything was normal? This was exactly the dilemma that a man faced in a recent viral video. A woman pranked her husband by adding excess salt in a dish that she prepared, and his reaction was simply unmissable. Take a look at the full viral video here:

The viral video was shared on Instagram Reels by a popular channel called ‘Only The Crowders’ who capture a lot of family fun on their handle. In the salt spoon prank, the woman took a whole spoonful of salt and then dipped it into a meaty gravy that had red kidney beans in it. Due to the red colour of the gravy, the salt was completely camouflaged and it seemed like a regular spoon of the dish. When the husband tried the dish, he tried to control his reaction and pretend like everything was okay. But he involuntarily winced due to the excess salt content in the spoon!

When the husband was asked how it tasted, he nodded his head and approved of the dish. Then, the woman carried out the same salt spoon prank on her child. He almost spit out the dish – but when his father nudged him, he too pretended like the dish was delicious! “Why did they lie,” laughed the lady in the caption of the video. 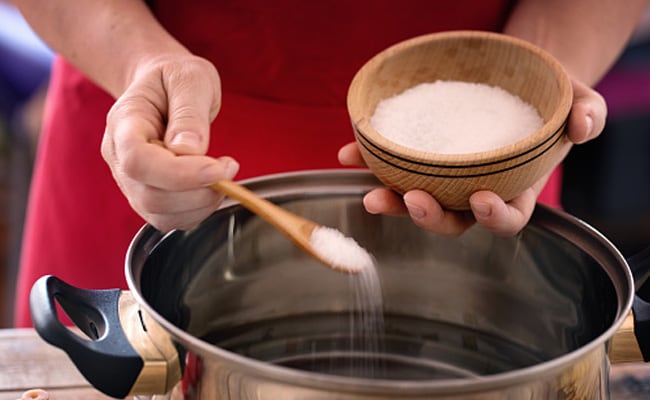 Excess salt can ruin a dish and leave a bitter aftertaste. Photo: iStock

The salt spoon prank has gone viral in a short span of time since it was shared. It has already received over 363k views and 12.3k likes, and the numbers are only going up. Hundreds of reactions too poured into the comments section. “First of all, Keith done nudged the boy to make sure he lies,” laughed one user while another wrote, “I’d never eat anything you cooked ever again. That’s not a joke. That’s poisoning.” A few others laughed at the husband’s reaction to his wife’s prank. Dialogues like “Did you stir it up a little bit,” and “Add more meat and sauce,” left internet users in splits.

What did you think of the funny viral video of the salt spoon prank? Also tell us what you thought of the woman’s prank idea and the husband’s reaction to it.

About Aditi AhujaAditi loves talking to and meeting like-minded foodies (especially the kind who like veg momos). Plus points if you get her bad jokes and sitcom references, or if you recommend a new place to eat at.