Global oil markets remain incredibly tight, the chief executive of the world’s biggest crude producer has warned, as he said the world was too focused on the demand impact of a possible recession rather than the limitations of current supply.

The comments from Amin Nasser, chief executive of Saudi Aramco, come as oil producer group Opec, headed by Saudi Arabia, prepares to announce what is expected to be a substantial cut to production on Wednesday to boost oil prices and preserve spare production capacity, particularly in the Gulf kingdom.

Riyadh fears that Russian output could fall sharply later this year when western sanctions against the country’s oil exports tighten, and is keen to keep some spare production capacity in reserve, according to people familiar with Saudi Arabia’s thinking.

Speaking at the Energy Intelligence Forum in London, Nasser said current oil prices, which have fallen to less than $90 a barrel from a high of $139 earlier this year, reflected a market focused “on short-term economics rather than supply fundamentals”.

Under-investment meant that global spare capacity, defined as extra crude supply that could be brought online quickly in the event of unforeseen incidents, remained “extremely low” and would be “completely eroded” if China relaxed its long-running Covid-19 restrictions and began to consume more, Nasser warned.

“If China opens up, [the] economy starts improving or the aviation industry starts asking for more jet fuel, you will erode this spare capacity,” he said. “And when you erode that spare capacity the world should be worried. There will be no space for any hiccup — any interruption, any unforeseen events anywhere around the world.” 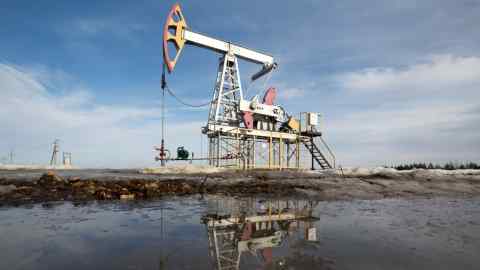 Saudi Aramco, which — buoyed by rising oil prices — overtook Apple this year as the world’s most valuable company, is one of the few producers investing in increasing output. The state-owned group is in the process of boosting its maximum production capacity from 12mn barrels a day to 13mn b/d by 2027.

Nasser stressed that this decision had been taken in 2020 and that it would be extremely difficult for the rest of the industry to suddenly ramp up long-term supply, implying that the world was in for a prolonged period of high oil prices.

“Even if we decide we are going to increase investment it is going to be difficult, it will take a number of years.”