Here are the latest updates:

Ukraine forces ‘out of ammo’ as battles rage with Russian troops

In Ukraine’s Mykolaiv region near the front line in the south, the regional governor stressed the urgent need for international military assistance.

“Russia’s army is more powerful, they have a lot of artillery and ammo. For now, this is a war of artillery … and we are out of ammo,” Vitaliy Kim said. “The help of Europe and America is very, very important because we just need ammo to defend our country.”

President Zelenskyy said in his address that Ukraine must “not allow the world to divert its attention away from what is happening on the battlefield”.

Russian troops are preparing a new offensive against the city of Sloviansk, Ukraine’s military said.

The General Staff of the Armed Forces of Ukraine said Moscow managed to get a foothold in the village of Bohorodychne, 24km (15 miles) northwest of Sloviansk, and was preparing to attack the city.

Army spokesman Oleksandr Shtupun said Russian troops “experienced success” in fighting in the direction of the city. Shtupun also claimed Russia had six carriers in the Black Sea “readied for the use of missile weapons”.

Ukraine remains in control of the Azot chemical plant in Severodonetsk where hundreds of civilians are sheltering, the region’s governor said.

The comments came after a Russia-backed separatist leader claimed 300-400 Ukrainian fighters were also trapped there.

“The information about the blockade of the Azot plant is a lie,” said Serhiy Haidai, governor of the Luhansk region. “Our forces are holding an industrial zone of Severodonetsk and are destroying the Russian army in the town.”

Ukraine has said some 800 people were hiding in several bomb shelters underneath the Azot plant, including about 200 employees and 600 residents of Severodonetsk.

Rodion Miroshnik, a Russian-backed representative of the self-proclaimed Luhansk People’s Republic, said 300 to 400 Ukrainian fighters are blockaded on the grounds of the plant, along with civilians, and had tried to negotiate their passage to the city of Lysychansk.

“Such demands are unacceptable and will not be discussed,” Miroshnik said, adding negotiations with fighters about civilians at the plant were under way. 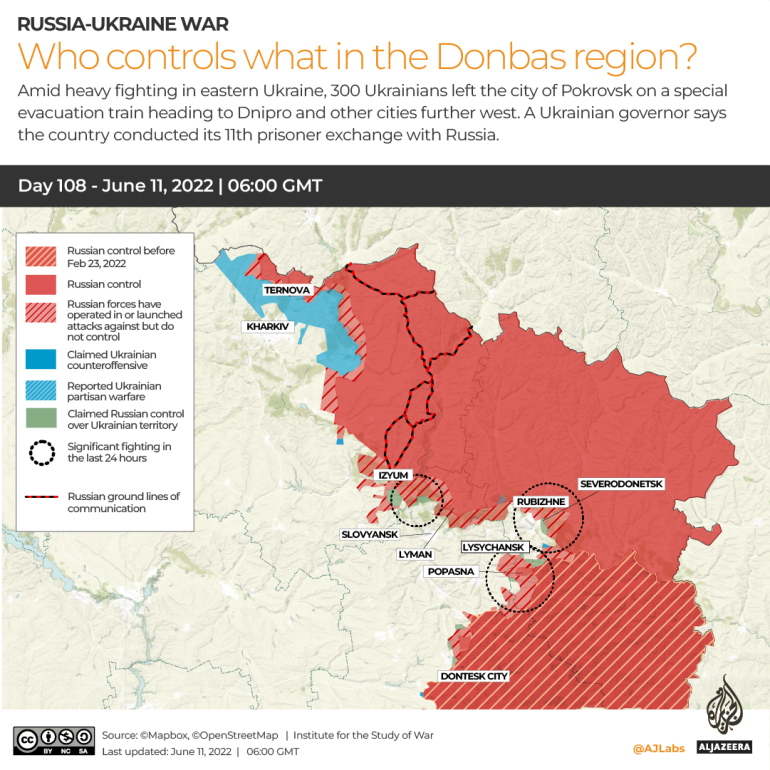 Russia says will respond to NATO buildup in Poland

Moscow’s response to a buildup of NATO forces in Poland will be proportionate, Russia’s foreign ministry said.

“A response, as always, will be proportionate and appropriate, intended to neutralise potential threats to the security of the Russian Federation,” Interfax quoted Oleg Tyapkin, the head of a foreign ministry department in charge of Russian relations with Europe.

Ukraine hopes to save foreign soldiers sentenced to death: Lawmaker

Ukraine is doing everything possible to save three foreign nationals sentenced to death by proxy authorities in Donbas for fighting for Ukraine, a lawmaker said.

After being captured, two Britons and a Moroccan were convicted of “mercenary activities” by a court in the self-proclaimed Donetsk People’s Republic (DPR), whose separatist leaders are backed by Moscow.

“Both the Defence Ministry and the Main Directorate of Intelligence, which deals with the exchange of prisoners, are taking all necessary measures to ensure these citizens of foreign states … are saved,” lawmaker Fedir Venislavskyi said on national television.

Deputy Prime Minister Iryna Vereshchuk said she believed the separatist authorities would ultimately act rationally, “for they are well aware of the irreparable implications for them and for the Russians if they take any wrong steps against these three of our soldiers”.

“Something tells me that, eventually, one way or another, sooner or later, these three servicemen will be exchanged [or otherwise get home].”

The Russian military shot down two MIG-29 planes in the Mikolayiv region and one Su-25 fighter jet in the Kharkiv region, it said in a statement.

Russian shelling of the Azot chemical plant in Severodonetsk caused a major fire after a leak of tonnes of oil, the regional governor said.

Governor Haidai did not say if the blaze at the plant, where hundreds of civilians are sheltering, had been extinguished. Russian forces controlled most of the city, but Ukraine fighters controlled the Azot chemical factory, he said.

The battle for Severodonetsk and its destruction recall weeks of bombardment of the southern port city of Mariupol.

It was reduced to ruins before Russian forces took control of the city last month, with the last Ukrainian defenders surrendering from their redoubt in the Azovstal steel plant.

‘We will prevail’ vows Ukraine leader

“We are definitely going to prevail in this war that Russia has started,” Zelenskyy told a conference in Singapore via videolink. “It is on the battlefields in Ukraine that the future rules of this world are being decided.”

Speaking later on national television, he said the move was part of a deliberate strategy to cut off electricity in towns in Donetsk that remain in Ukrainian hands. “The enemy understands where he is hitting and for what purpose,” he said.

For the news updates on June 11 please see here