The US Supreme Court’s decision to overturn Roe vs Wade, the ruling that enshrined the constitutional right to an abortion for nearly 50 years, has set off a number of lawsuits in states across the country as abortion providers try to stay open.

Complicating matters for abortion providers, their lawyers, advocates and patients is the legal disarray in states with multiple — and at times conflicting — abortion laws. Striking down the federal legal precedent to which legislatures have deferred for five decades has unleashed a Pandora’s box of abortion statutes, leaving experts with no definitive answers on which measures reign supreme at state level.

Laws restricting abortion access — from outright bans to limitations with varying timeframes — have piled up over the past few decades in states whose conservative legislatures kept statutes predating Roe or passed more bans after it, including so-called trigger laws meant to snap into effect after the 1973 Roe precedent was overturned.

Rob McDuff, a lawyer who represents Mississippi’s last remaining abortion clinic, said the state’s regime — which includes a 15-week abortion ban, a suspended six-week ban as well as a trigger law banning nearly all procedures — was “just another example of the chaos and tragedy that is just resulting from this decision of the US Supreme Court”. He added: “There is a crazy patchwork”.

“It’s a mess,” said Alex Lawrence, partner at Morrison Foerster and one of the lawyers who is working on a case against a Texas abortion ban.

“Uncertainty in the law just breeds confusion,” Lawrence added. The Supreme Court decision has raised “so many questions” that nobody has “ever had to answer because of Roe, and now it’s gone. And so you have basically removed the scaffolding and everything falls down”.

The string of cases mushrooming across the country illustrates the transformation of the legal fight for abortion rights post-Roe, with advocates seeking new strategies on a state-by-state basis after the decades-long federal precedent was erased.

“It’s clear that precedent doesn’t have necessarily the same value that it did before if the US Supreme Court can overturn its own 50-year precedent in the way that it did,” said Christopher Griffin, research professor at the University of Arizona’s law school who consulted on the Mississippi challenge.

The Texas case came in response to an advisory last week from Ken Paxton, the state’s attorney-general, saying prosecutors could bring criminal charges based on abortion bans predating Roe.

Abortion providers in Texas on Monday sued, arguing “greenlight[ing]” such prosecutions “must not stand” as the state’s pre-Roe ban — which prohibits and criminalises abortion — had not been on the books for nearly 40 years.

A Texas district court judge on Tuesday suspended the ban, arguing it had been repealed and could not be enforced. Arguments on the suspension will be heard on July 12. For now, abortions up until six weeks remain legal in Texas under a law that came into force last September. But a trigger law that bans abortions entirely with limited exceptions is set to take effect in approximately two months.

A challenge by Louisiana abortion providers has also resulted in a temporary reprieve, after a judge earlier this week suspended trigger laws that criminalise abortion until a court hearing on July 8. Abortion services in Louisiana have resumed and by Tuesday morning, Hope Medical Group for Women, the clinic bringing the lawsuit, had 39 appointments.

Before the suspension, “doctors were put in the impossible position of deciding between refusing to provide potentially life-saving care to pregnant women, or risking going to jail for up to 15 years”, said Joanna Wright, a partner at Boies Schiller Flexner and a lead lawyer in the case.

A court in Utah has also temporarily blocked a trigger law that criminalises abortion — imposing prison sentences of up to 15 years on doctors — after clinics filed a lawsuit on Saturday.

“We pass laws and they get piled on top of one another with no consideration for how they interface,” said Karrie Galloway, president and chief executive of Planned Parenthood Association of Utah, which brought the case.

Planned Parenthood clinics in Utah had more than 55 abortion appointments scheduled this week, according to court documents. Galloway said one clinic turned 13 people away on Saturday.

Jackson Women’s Health Organization — the last clinic in Mississippi at the heart of the case that resulted in Roe’s reversal — on Monday sued to block the state’s trigger ban, which is set to take effect next week.

The case argued Pro-Choice Mississippi vs Fordice, a 1998 ruling by the Mississippi Supreme Court, had enshrined abortion rights under the state’s constitution.

“We’ve always known that this precedent . . . was there and could be invoked if necessary,” said McDuff, who worked on the 1998 case. “In Mississippi as in many other states, the battleground is now shifting to the state courts [and] constitutions”.

Despite these temporary wins, not every challenge has succeeded. A ban on abortions after six weeks has come into effect in Tennessee after abortion providers dropped a legal challenge. A trigger law that bans abortions with limited exceptions is set to take effect in about two months. 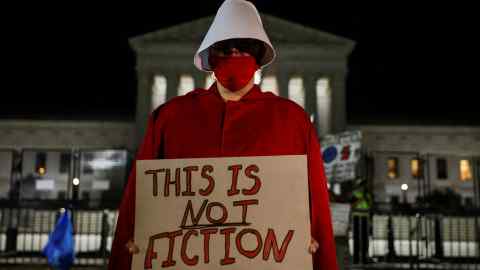 This week, the Fifth US Circuit Court of Appeals allowed laws to take effect in Texas that specify how clinics must dispose of embryonic and foetal tissue following abortions, saying that post-Roe, states may regulate the procedure as they please.

Beyond suspensions, the outcomes of these cases — which may reach those states’ highest courts — could transform state legislatures in unprecedented ways.

“It is entirely up to [every state’s] supreme court to decide the scope of the constitutional right that they’re using to strike down [bans] if any of these lawsuits prevail,” said a lawyer on one of the cases, who asked not to be identified. “And that will determine the contours of what a legislature can do”.