The leaders of France, Germany and Italy met Ukrainian president Volodymyr Zelenskyy on Thursday in a show of support Kyiv hopes will be followed by more weapons and tougher action to help in the war with Russia.

The leaders were due to hold talks on Ukraine’s EU membership aspirations. The European Commission is expected to recommend on Friday that Ukraine should be granted EU candidate status, a first step towards membership, although there will be conditions on improving the rule of law and tackling corruption.

Soon after the European leaders reached the capital, air raid sirens rang out in the city and across Ukraine, warning of possible missile strikes.

Macron said the European leaders were bringing “a message of European unity and support for the Ukrainian people, to talk of the present and the future because we know the weeks ahead will be very difficult”.

After visiting Irpin, he saluted the “heroism” of Ukrainians, saying in a tweet: “Ukraine is resisting. It must be able to win.”

Scholz said he had invited Zelenskyy to take part in the summit of G7 leaders later this month in Bavaria. The damage in Irpin said “a lot about the brutality of Russia’s war of aggression, which is all about destruction and conquest”, he said. “The destruction we’ve seen here . . . should be an admonishment to us to act.”

The visit comes as the leaders of the eurozone’s three largest economies have been accused by some in Kyiv, the Baltic countries and Poland of being too accommodating to Russia — accusations that Paris, Berlin and Rome have denied.

Before his trip to Kyiv Macron, who has been criticised for urging allies not to “humiliate” Russia, insisted he was in constant touch with Zelenskyy about the war and reminded Nato allies that “we are not waging war against Russia”.

“The only desirable outcome of the conflict is either a Ukrainian military victory or at some point a negotiation because there will have been a ceasefire, which could allow for an agreement between Ukraine and Russia,” he said on Wednesday.

Macron added: “I think we’re at a moment when we, the EU, need to send clear political signals to Ukraine and the Ukrainian people as they have been heroically resisting for several months.” 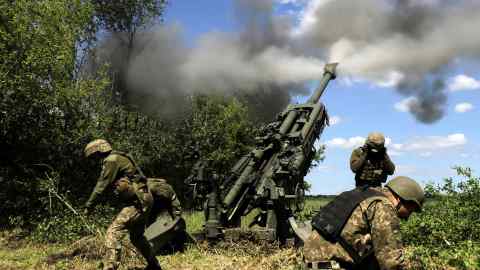 Meanwhile, Nato defence ministers are discussing further arms deliveries for Ukraine, which has complained of a shortage of the long-range and heavy-calibre artillery needed to fight advancing Russian forces in the eastern Donbas and southern coastal regions.

US president Joe Biden said on Wednesday that the US would provide an additional $1bn in security assistance to Kyiv, including artillery, coastal defence and advanced rocket systems.

Video: Volodymyr Zelenskyy: ‘No one is humiliating Ukraine. They are killing us’