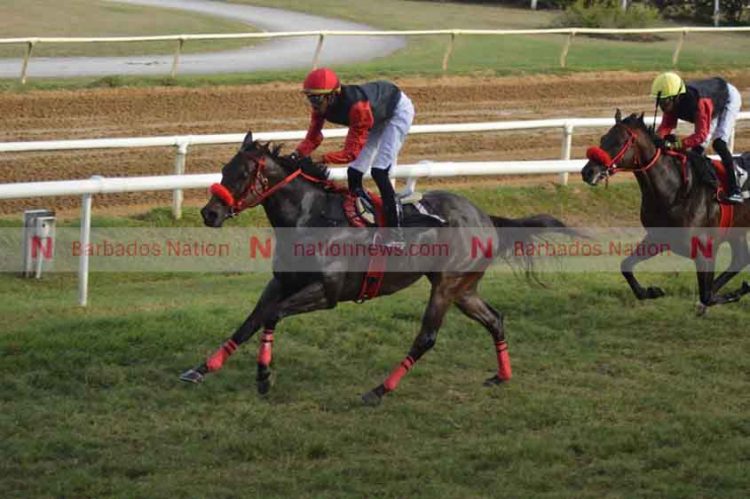 Apprentice Jockey Teshawn Hazelwood dominated the Happy Fathers Day Raceday programme with a riding treble to share the spotlight with Sir David Seale’s Dominus who sprinted to victory in the feature race at the Garrison Savannah yesterday.

In perfect firm conditions Hazelwood won with Future Star, Rainbow Warrior and Stir It Up while Sir David’s new import Brilliant News chased Dominus home to give Hopefield Stable a one two finish.

Jockey Rey Williams made it back to back wins on the five-year-old bay horse Dominus groomed by Anderson Prescott Jr when he sped home in a blazing 1:04.4 success in the  Father’s Day (Handicap) over 1 100 metres for three-year-olds and older horses rated 95-75.

The pair who were quickest out of the gates went 24 secs flat for the first quarter mile, before cruising past the half mile pole in a swift 46.4 at which point the chasing pack – Brenna Pass, Joshua, Corsi, Brilliant News and Whatyouthink – were chasing to get on terms. The Andrew Nunes-trained Dominus then sailed into the homestretch a comfortable leader as the others circled on the outside. (LY)

Subscribe now to our eNATION edition for the full story.

For the latest stories and breaking news updates download the Nationnews apps for iOS and Android.