China’s long-delayed economic data showed a mixed recovery in the third quarter, with unemployment rising and retail sales weakening in September despite a pickup in growth.

Gross domestic product grew 3.9 per cent in the July-to-September period from a year ago, rebounding from almost stagnant growth in the second quarter when Shanghai was still in lockdown. The figure was stronger than the median estimate of 3.3 per cent in a Bloomberg survey of economists.

The data were postponed by nearly a week as the country held its 20th party congress — a key political event during which President Xi Jinping secured a third term as head of the ruling Communist Party and consolidated his power. 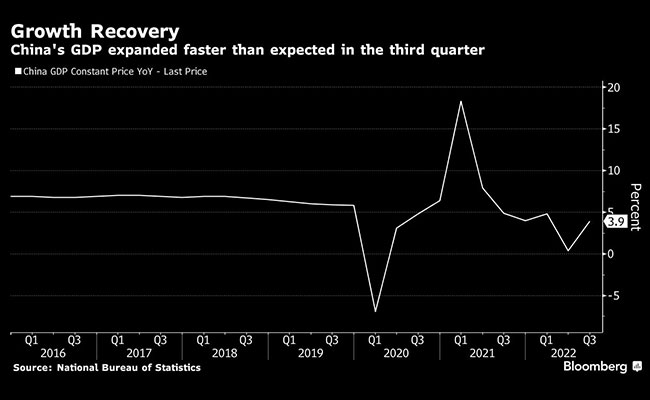 The monthly indicators for September painted a weaker picture. After four months of declines, unemployment rose to 5.5 per cent in September from 5.3 per cent in August. Retail sales growth slowed to 2.5 per cent, compared to August’s 5.4 per cent increase and far lower than the 3 per cent estimated.

Industrial production rose 6.3 per cent in September from a year earlier, more than August’s 4.2 per cent rise and beating the 4.8 per cent forecast from economists. Fixed asset investment rose 5.9 per cent in the first nine months of the year, mainly in line with expectations.

The data was “mildly surprising on the upside,” largely due to the manufacturing sector, said Raymond Yeung, chief economist for Greater China at Australia & New Zealand Banking Group Ltd. The results will reinforce the government’s policy stance, he said, with a focus on “prudent and targeted” efforts. 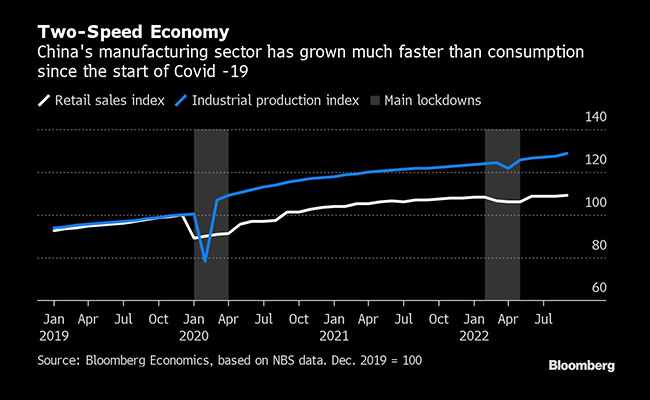 The economy “overcame” the negative impact from “multiple unexpected shocks,” the NBS said in a statement accompanying the data, adding that main indicators “have recovered and steadied to remain within a reasonable range.”

The country also released trade data Monday showing export growth slowing in September. Exports in US dollar terms expanded 5.7 per cent last month from a year earlier, down from 7.1 per cent in August, while imports rose 0.3 per cent, unchanged from the prior month. That data was also delayed during the party congress.

September’s deceleration in China’s export growth adds to evidence that global demand is declining. Things may get even worse in 4Q, with a weakening global outlook meaning bleaker prospects for China’s exports. The diminishing buffer from exports — a key growth crutch during the pandemic — leaves the economy more vulnerable to the property downturn and Covid Zero restraints.

China is trying to stage a recovery as the third quarter was threatened by a smattering of smaller Covid outbreaks across the nation that resulted in mobility curbs and which dampened consumer and business confidence.

During a speech after the close of the congress, Xi said China’s economy is “resilient” and vowed to deepen economic ties with other countries.

The economy has come under immense pressure, with economists now forecasting growth of just 3.3 per cent for all of 2022 — far lower than an official target of about 5.5 per cent set earlier this year. Officials began downplaying that goal in recent months as it slipped out of reach, instead focusing on job stability and other metrics.

–With assistance from James Mayger.